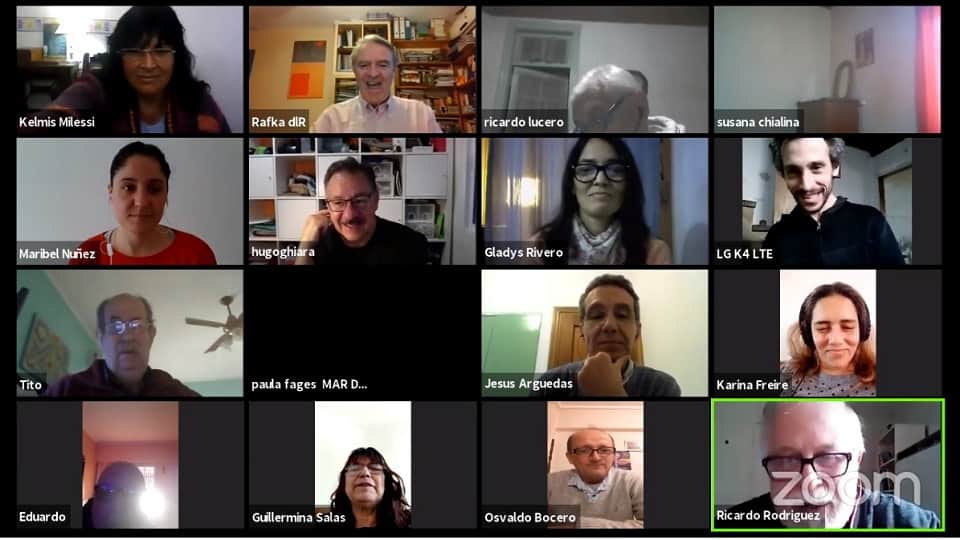 During the celebration of the 10th anniversary of the Week for Nonviolencein Mar del Plata, promoted by Osvaldo Bocero and Karina Freira, where activists from more than 20 countries in America, Europe and Africa participated virtually..

There, Rafael de la Rubia announced from Madrid that the 3rd World March (WM) for Peace and Non-Violence will take place in 2024.

The Forum for Nonviolence began with a small and emotional ceremony asking for world peace in three languages: Spanish, Portuguese and Guaraní. They were few minutes of meditation and connection between the participants.

Osvaldo presented the progress and achievements of what began as a Week for Nonviolence within the framework of the 1st World March in 2009 and how it has progressed during these 10 years. A short documentary summarizing that journey with images was screened.

We present here some of the proposals Rafael de la Rubia, the spokesperson for the World March, made in his speech:

“This Week for Nonviolence is an example of permanence for 10 years, which serves as inspiration. It is the sustained activity in the process, which shows us the way and the progress.”

At the beginning of February 2016, at the Peña Blanca Forum (Honduras), the humanist association WWW launched the campaign for the inclusion of the word nonviolence in the dictionary of the Academies of the Spanish Language.

It is about extending this action to other languages that do not have the word either. Nonviolence in Russian is ненасилие, in Czech it is nenásilí, in German gewaltlosigkeit, in Italian nonviolenza and in English nonviolence, but in Spanish it does not exist.

In order to include it in the Spanish language dictionary, it must be documented that the word is used normally. It is therefore up to the social agents to work so that its use is generalized and its meaning is assimilated and understood in all places where Spanish is spoken.

We take the Nonviolence Day as an opportunity to invite all to use it as a single word, together and without the hyphen, and thus we can get the word official in the Spanish language. Let’s collaborate to popularize its use and, with it, to give entity to a key word for a new social era.

Mediterranean Sea of Peace: This campaign started in the 2nd World March, it aims to turn the Mediterranean into a sea of peace, free of nuclear weapons and where cultures meet.

-Sketchbook from Editorial Saure. 100 pages. It will be released in a few weeks. In Spanish and Basque languages. Editions in other languages ​​are expected.

– Book of the Secretariat of the World Summit of Nobel Peace Laureates: WWW has been asked to write the chapter on nonviolence. It will be delivered in December this year.

–Book of the 2nd World March.  We are working on the content and assembly. Information is still missing from some places.

The book release may take a little longer and could take place once the TPNW goes into effect. In that case we would incorporate a specific chapter on that topic.

– We are working on holding a Festival of Global Civic Cyber-activism on the subject of TPAN to celebrate its entry into force when it is proclaimed by the United Nations. We calculate for the beginning of 2021.

– We will participate in the Perugia – Assisi Peace March next October 10th.

– International Conference: The Secretariat of the World Summit of Nobel Peace Laureates has invited WWW to collaborate together with four other international organizations in an event where the young from these organizations will present their proposals, projects and actions related with the subject. In Geneva at the end of October

– Regional Forum for Peace in Latin America, in March 2021, promoted by the Secretariat of World Summit of Nobel Peace Prize Laureates with the support of the city of Mérida in Mexico and 9 universities in the Mayan region. Our organization WWW is also invited.

-We formally announce that the 3rd WM will begin on October 2, 2024

-As in the 2nd MM it will begin and end in the same city after circling the planet.

-It will include regional tours such as: South American March, Central American March, March for the Mediterranean Sea of Peace and Latin American March. We hope that there will be others that will join. Hopefully we have marches with identity across continents.

-It will also have a virtual tour format, in order to give the greatest possible participation to those interested.

Calendar of the 3rd World March

That is it, thank you very much…

We thank Liz Vasquez for the English translation of this article.